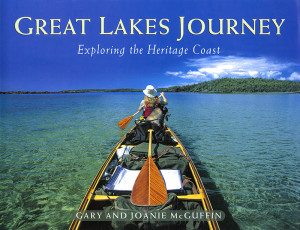 The Great Lakes Heritage Coast is an area that includes 1.46 million hectares of coastline along the north shore of Lake Superior, Lake Huron, Georgian Bay, and Cockburn, St. Joseph, and Manitoulin Islands. It has been recognized by the Ontario government as a natural resource to be preserved, with the first priority being the protection and restoration of its coastal ecosystems. As champions of Canada’s wilderness, Gary and Joanie McGuffin vowed to support this project by paddling the route and reporting on their adventure.

For three months in the summer of 2002, they travelled three thousand kilometres, with their three year-old daughter, Sila, and their Alaskan malamute, Kalija, from the Pigeon River near Thunder Bay to Port Severn on Georgian Bay, in a twenty-one-foot cedar strip canoe They carried the communications equipment necessary to share the adventure through weekly radio broadcasts, newspaper stories, and a web site, <www.greatlakesheritagecoast.com>.

Their journey took them along the most magnificent freshwater coastline in the world. Through Joanie’s passionate narrative and Gary’s evocative images, the McGuffins share with readers the experiences of paddling with woodland caribou, gliding beneath towering cliffs, studying ancient red-ochre pictographs, camping where people have camped for thousands of years, discovering fossils of the earth’s earliest life forms, and exploring the bedrock headlands and the other geological wonders laid bare by retreating glaciers ten millennia ago.

Paddling over the same waters traversed by voyageurs and fur traders of the past, the McGuffins take us on an epic journey, describing the exhilaration of crossing the greatest expanse of freshwater in the world, the warmth of campfires on cool nights, the brilliance of the tars and the northern lights, and the peace and solitude of being immersed in the beauty and mystery of the natural world.

This book is a tribute to that beauty, and an inspiration to those who would protect it.