Since 2008, we have been exploring northern Ontario in search of the places that the world-renowned Group of Seven artists immortalized in their paintings 100 years ago.This ongoing cultural anthropology research locates, identifies, and documents these painting sites. But even more astonishing than walking in their footsteps is our discovery that these landscape paintings actually depict real places that still exist today.

PAINTED LAND: In Search of The Group of Seven (sizzle reel) from WhitePinePictures on Vimeo.

Painted Land: In Search of the Group of Seven Trailer

But where exactly were these iconic masterpieces created? The passage of time has erased the memory of where Lawren Harris, J.E.H. MacDonald, Arthur Lismer, Franklin Carmichael, A.Y. Jackson, A.J. Casson, and Franz Johnston captured these rugged landscapes.

Painted Land: In Search of the Group of Seven is an investigative arts film that is part mystery, part history and part adventure.

Developed in association with TVOntario, the Northern Ontario Heritage Fund Corporation, and documentary channel and with the assistance of the OMDC Film Fund.

With the support of the NORDIK Institute, Algoma University, CN and the generous assistance of Tourism Ontario, The Master’s Gallery Ltd. and Gary Waxman.

Painted Land: In Search of the Group of Seven

This map highlights the locations where the Group of Seven painted in their formative years a century ago. This geography and time frame defined the parameters of our research and our fieldwork with our partner, art historian, Michael Burtch. By canoe, on foot, via train we have travelled together across northern Ontario discovering the exact locations where these iconic landscape sketches and paintings were made. When we are there in the same season, same time of day with the same light and the same weather, Gary is able to capture on film images that quite closely match their landscape paintings. It is as if we are canoeing with A.Y.Jackson across the river, following Lawren Harris up a cliff, sitting next to J.E.H. MacDonald as he dabs autumn colour on a canvas. It’s a haunting, exciting phenomenal experience that grows ever more fascinating with each passing year. 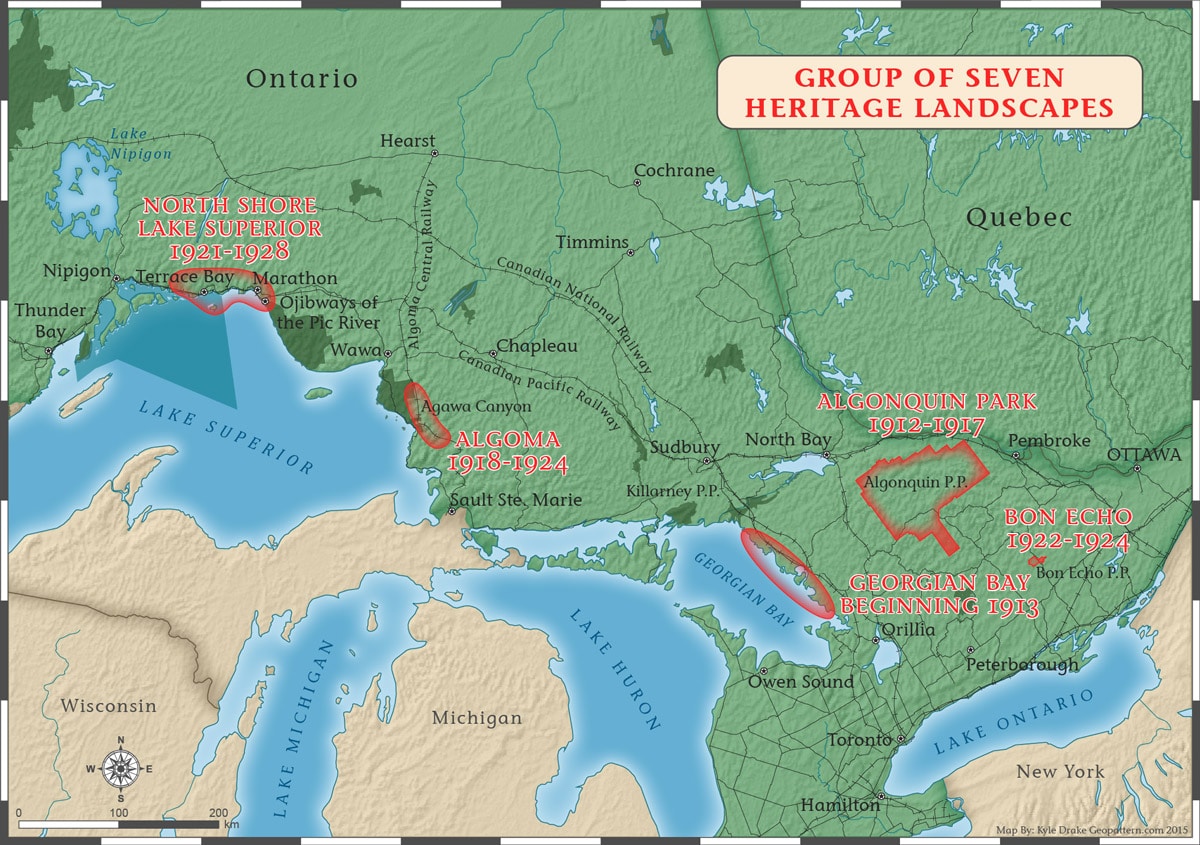