Century of solemn and inspiring landscapes 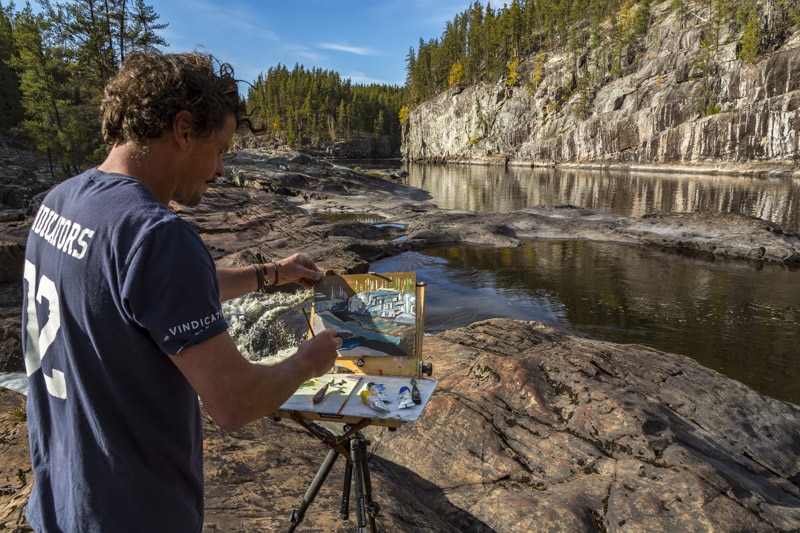 Almost exactly a century ago, even down to the season, J.E.H MacDonald painted one of the Group of Seven’s most recognizable paintings, that of The Solemn Land.

Fast forward 100 years and that notable painting of the rugged bluffs on the Montreal River hangs in the National Gallery of Canada. Meanwhile, the Double Door Gallery outside Barrie, Ont., will host an exhibit called Solemn Land: Exploring Algoma’s Montreal River. All of the works resulted from one week’s sketches made just north of Sault Ste. Marie, by seven plein air painters and one photographer.

The artists were assembled by James Aitken, who wanted his group to experience the same landscapes as the Group of Seven. They travelled from southern Ontario, through the Sault and north to Mile 92 on the Algoma Central Railway. Hosted at Four Way Lodge by explorer and photographer Gary McGuffin, their goal was to paint from when the fog lifted in the mornings until the sun set each night; putting their own take on the vistas so adored by the Group of Seven. Between Sept. 26 and Oct. 3, McGuffin guided them to the sites of some of the Group of Seven paintings, as well as to rich landscapes that the Group of Seven wouldn’t have been able to reach.

“Originally I had hoped to take them to Agawa Canyon. But since that wasn’t possible, the lodge overlooking the Solemn Land bluffs seemed like a natural fit,” McGuffin told the Sault Star. “During the week, the bluffs became a significant icon in their paintings.”

Aitken had contacted McGuffin after seeing the Painted Land: In Search of the Group of Seven documentary on the TVO website. The documentary follows McGuffin and his wife, Joanie, tracking down multiple painting sites with art historian Michael Burtch.

“Gary is a nature detective in terms of finding the sites, and his passion is next to none,” said Aitken. “I loved what they did with the documentary and was thrilled when Gary was willing to host us to paint.”

Aitken, like the Group of Seven, loves being out in big country, fulfilled by painting the character of the Northern landscape. 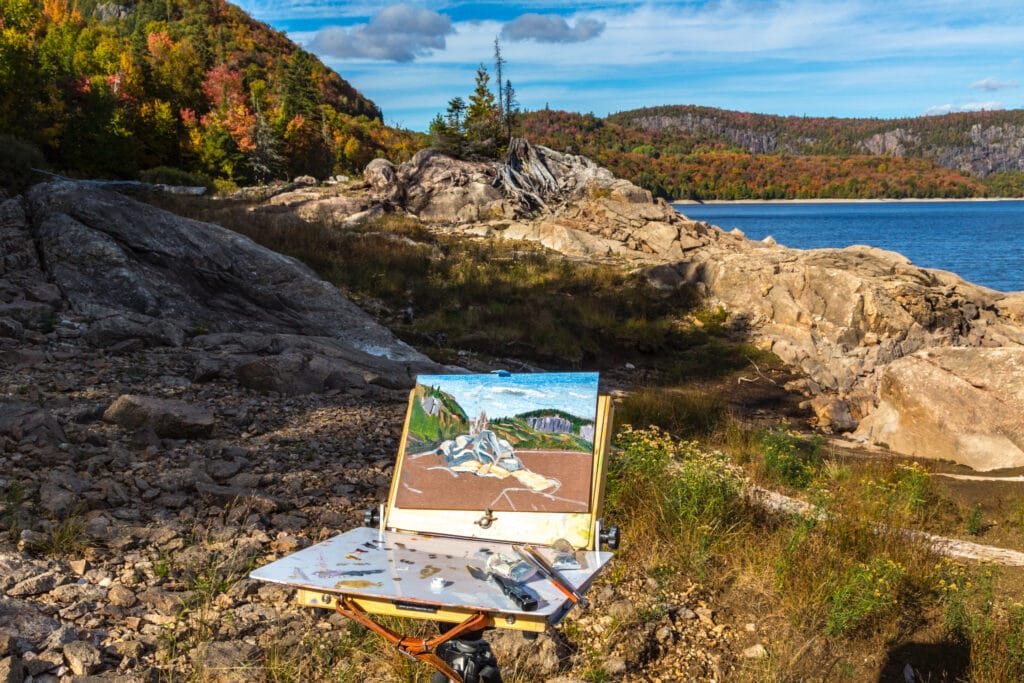 “I am the least experienced of the group and have the most to learn,” said Aitken of the group that has painted together before, “but I feel we are always learning. For me it is monumental to learn from those experienced friends.”

Each evening, the group gathered around the evening campfire to discuss their work and trade tips and tricks on painting in the outdoors.

On boards and small canvases called sketches, six of the seven painters use oil paint as their medium, while Paul Nabuurs uses acrylic. Once home, the artists use their favourite sketches to inform full sized canvases, just like the Group of Seven did.

“Plein air is poetry and the big canvas is the novel,” said Aitken. “I’m very interested in the sketches … there is a lot of momentum in them. They have to be done quickly to get the idea down. You can see a lot more of the structure of the painting. You understand the problems artists are solving and how quickly they are solving them with shifting light, and the decisions they are making about what to simplify and what to go deep on.”

Aitken stands when he paints because he likes to move around.

“Plein air style allows you to get out on the land and find vistas and interesting spots,” he said. “With such small boards you can move around through the bush pretty easily. At one of MacDonald’s locations, because it was quite overgrown, I snuggled up to the trees and did a bird’s-eye view. Solemn Land took us all – the sheer size of it – and the fact that we were camped right there looking at it every morning, studying the cliffs, and how the light would reflect.”

“We hit the fall colours bang on,” said McGuffin. “Everything the artists saw they were painting, including the iconic view of the Solemn Land bluffs from the lodge. We also took boats up the Montreal River so the artists could see the dramatic change of the landscape from the reds and oranges of the deciduous forest to the yellows of the boreal. We went as far as the Golden Staircase, a stunning series of falls and pools, like a series of steps.”

While the cliffs of Solemn Land haven’t changed in 100 years, other sites the group visited have been altered.

“Standing on the site of J.E.H. MacDonald’s Montreal River Falls, with no rushing water … that was quite remarkable,” said Aitken. “The river is dammed now, so I tried to paint in a piece of the hydro generating station to show how much it has changed in 100 years.”

Aitken said he hopes to return to paint along the North Shore of Superior, or in Agawa Canyon, fuelled by his infatuation with Lawren Harris’s art.

Peter Adams, of Collingwood, Ont., was one of the other seven painters on the northern expedition. He is a resident artist at the Double Door Gallery. While sitting around at their Four Way Lodge campfire, impacted by their experience, Adams suggested a change in plans for his upcoming one-man show. He proposed a group exhibition to celebrate their work together. They agreed that each artist would present three or four plein air sketches and one studio canvas with Gary exhibiting his photography. 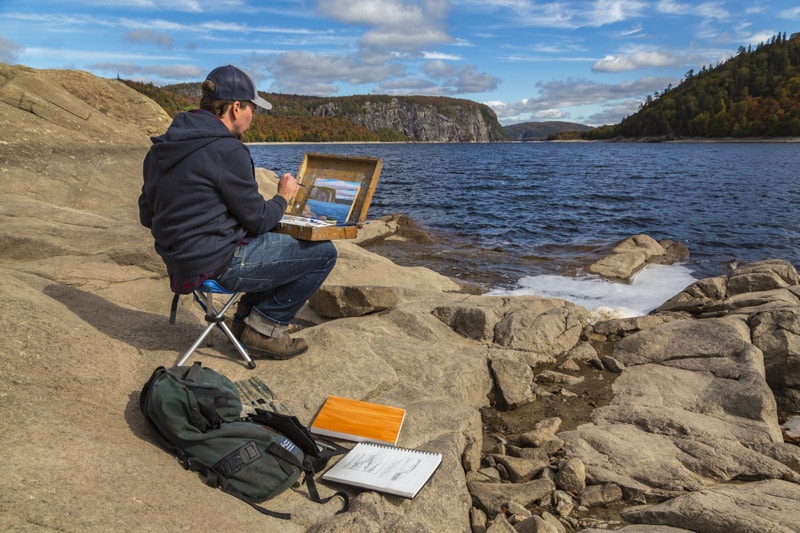 “I thought it would be so valuable from the visitors’ point of view, to make the connection between our plein air work and the big canvas work,” said Adams. “Just like the Group of Seven, our plein air sketches are trial by fire; while we are being bitten by bugs, getting sunburnt, hungry. You paint a different painting having been in the field, and visitors will be able to see how those factors translate to the gallery piece.”

Adams paints in oil. One of the benefits is that it doesn’t dry as quickly as acrylic.

“I like the sensuality of it,” he said. “It’s an appealing medium and I like to be able to push the oil around for a while.

“It’s fun to be able to celebrate something we did so recently … I love that we were just there. The experience is quite fresh … and literally, the oil may not even be dry. It can take one to two weeks to be dry to the touch, but a couple months to be completely dry.” 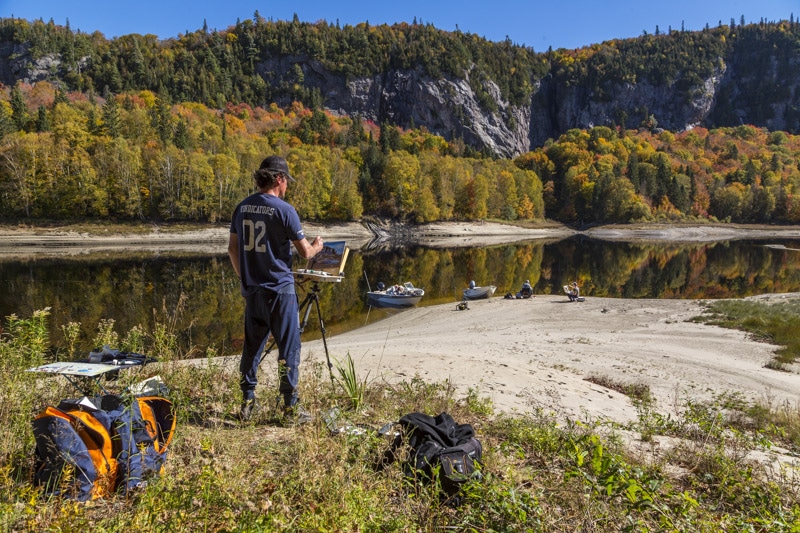 While the Group of Seven are no longer around to paint, many of the landscapes that they immortalized are still very much there. Since the Painted Land documentary first aired, McGuffin has continued the work of matching paintings to the exact Northern Ontario locations. He hopes one day that the corridor where the Group of Seven painted will get the international recognition and preservation that it deserves, perhaps even as a UNESCO World Heritage Site.

Those who can’t make it to Barrie for the Solemn Land exhibition can still enjoy the landscapes in a number of ways. Those in Sault Ste. Marie can see one of J.E.H MacDonald’s sketches of Solemn Land, as it is part of the Art Gallery of Algoma’s permanent collection, and is currently on display. Or those in Ottawa can view MacDonald’s iconic studio canvas at the National Gallery. Alternatively, the documentary Painted Land, is available for purchase on DVD, or can be seen on TVO’s website for free at  https://www.tvo.org/video/documentaries/painted-land-in-search-of-the-group-of-seven-feature .

“Solemn Land was the natural name of the exhibit,” said Aitken. “It was the grounding, inspiring landscape for those eight days. It wasn’t about the painters; it was about the landscape.” Some might even boldly say the same of the Group of Seven, but regardless, it’s nice to know that there are landscape painters still dedicated to capturing the rugged and entrancing vistas of Northern Ontario.