In The Footsteps Of Grey Owl 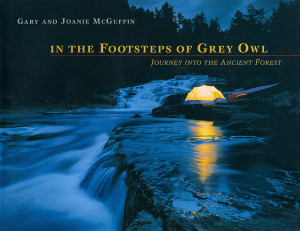 Grey Owl, or Wa-Sha-Quon-Asin as he was known to the Ojibway people, was born Archie Belaney in England in 1888. At the age of seventeen, he moved to Canada to follow his boyhood facination for the Canadian wilderness and the aboriginal peoples. Grey Owl’s appreciation of the beauty and fragility of the wilderness became the driving force behind his celebrated speeches and his four best-selling books, The Men of the the Last Frontier, Pilgrims of the Wild, The adventures of Sajo and Her Beaver People, and Tales of an Empty Cabin.

In 1996, almost sixty years after Grey Owl’s death, the Ontario provincial government was determining the future use of the landscape he loved. For better or worse, the fate of this northern wilderness was being decided with the input from corporations, interest groups, and the public. Gary and Joanie McGuffin decided to make their own contribution to this public debate by embarking on a journey that would take them into the heart of Grey Owl country. They aimed to show that the ancient forests and pristine waterways of the region constitute a magnificent natural heritage that should be preserved for all.

Their three-month-long, 1,900-kilometre (1,200-mile) canoe trip took the McGuffins through some of the most breathtakingly beautiful forests in Canada. From Algonquin Park to Temagami and Algoma, they travelled the same rivers that Grey Owl once paddled, including the Sturgeon, Spanish, Mississagi, Aubinadong, and Montreal. They often found themselves on long-unused and impenetrable portages and on waterways where few people now travel.

Together, Joanie’s words and Gary’s photographs tell an adventure story that includes encounters with wildlife, terrible storms, and perilous portages. It is also a story of achievement: the McGuffins’ efforts helped to shake the public debate over conservation policy.

In the Foosteps of Grey Owl is illustrated with more than a hundred glorious full-colour photographs, accompanied by selections from Grey Owl’s writings. This is a unique celebration of some of Canada’s most majestic wild forests.

Purchase “In The Footsteps of Grey Owl” in our store.